Reid has returned from Houston, where he was visiting his mother who is in a new facility on an experimental drug program. He is called back home from the office while the rest of the team heads off on their next case. It isn’t until the team is in the air that they learn that Diana is no longer in the Houston facility, but that she is now living with Reid, as the trial drug was not having the intended effect. 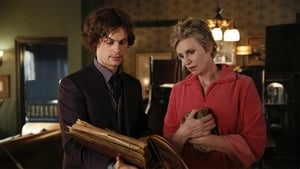