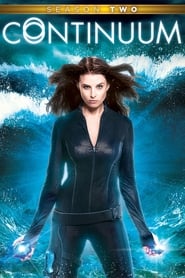 The second season of the Showcase television series Continuum premiered on April 21, 2013 and concluded on August 4, 2013. The series is created by Simon Barry. The series centers on Kiera Cameron as she time travels from 2077 to 2012 with a group of terrorists, and attempts to find a way home.